How QA Teams Use Automated Interoperability Testing To Hit Their Targets

The role of quality assurance has changed. Its strategic prominence has grown, its function is more widely appreciated and it is now crucial to a manufacturer’s ongoing success. It has, in the assessment of Capgemini, evolved “from mere defect finding to one of being an enabler of customer satisfaction and business outcomes”.

This is reflected in the increasing demands being placed on QA teams. Executive management today sees the potential impact of a well-resourced QA team and sets objectives to match.

The top five goals given to QA teams are to:

Faced with these growing pressures, it is little wonder QA leaders are seeking every possible advantage. When you are tasked with securing measurable business growth, your toolset is crucial.

The single biggest tool to help achieve each of the five goals outlined above is automation. 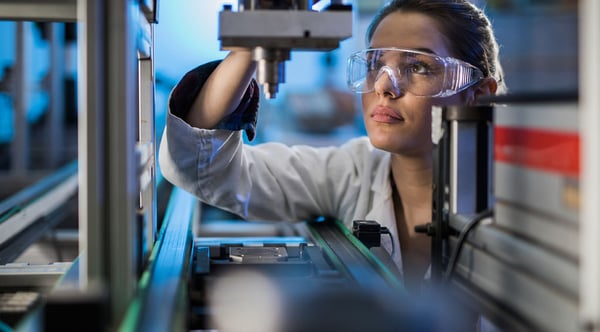 If testing can be quickened, it follows that more tests can be completed in a given timeframe. As a result, more products can be shipped without fear of negative consequences for brand equity.

Faster processes are a core promise of automated interoperability testing.

Of course, there are initial costs – both time and financial – when you introduce automated testing. A testing platform must be sourced. Appropriate training must be provided. And with each test, time must be spent devising and codifying the test (although artificial intelligence and machine learning are both playing an increasing role in helping to shape data models).

However, the advantages of automation soon emerge once those early investments have been navigated.

As well as quicker tests, automated testing can operate on a 24/7 basis. This eliminates the restrictions associated with manual testing, where tests can only be conducted during working hours.

Automation also delivers lower costs per test. But even more importantly, it is scalable. When testing demands grow, automated testing can cope without issue. If a manual testing team is faced with the same scenario, it must find extra resources and recruit new team members to increase capacity. Automation’s advantage here is key to prevent overwhelming test teams and ensures that resources are always available to support ongoing operational success.

Finally, automated testing minimises the chance of a company being outpaced by competitors. Delayed releases can have significant reputational and business impacts.

With automated testing in its armoury, a QA team is well positioned for success.

Automation enables increased test coverage. More extensive test scenarios can be handled with ease. This is crucial for devices where several functions or operations  might be happening simultaneously. It also contrasts significantly with manual testing, where testers will maximise their chances of identifying the precise fault by testing the minimum possible number of variables at any one time.

The detailed bug reporting and logging generated by automation platforms is another major benefit. It helps to ensure accountability throughout the supply chain. By making clear where the responsibility lies for fixing bugs found during the testing process, it acts as a powerful motivator in resolving issues. Furthermore, the ability of automated testing to precisely repeat test scenarios helps to quickly validate that bugs have truly been fixed.

Robust testing is also a by-product of consistency in the testing process. Automated testing ensures all tests are carried out identically, because the test methodologies are defined with such precision. This guarantees worldwide consistency in testing.

As a result, companies can reliably analyse data from test sites on different continents without fear of discrepancies between the actual tests. Avoiding geographic dispersion is a major benefit for QA leaders coordinating a widescale testing programme.

Meeting high consumer expectations is the final element of automation’s capacity to deliver more robust testing coverage. With high-price items such as cars and consumer electronics, only automation can offer the requisite depth of testing needed to ensure significant bugs are found and fixed before release. Over-the-air updates can also be tested using automation, providing another safety net between a company and potentially harmful reputational impacts.

The use of an automated testing platform facilitates things that are simply not possible – or at the very least not realistic – through manual testing. Device libraries, for example, are easily managed and maintained and can be quickly integrated with automated testing schedules and processes for maximum coverage.

Introducing automated testing to your QA function also delivers increased workplace motivation. Test engineers enjoy their work and take pride in their contributions, knowing products do not go to market in a state that generates consistently bad reviews. They also experience curiosity and excitement at working with the newest and best testing tools. This helps to create an environment where your industry’s top QA performers feel comfortable.

Take the First Step to Maximising Your Capabilities

Any QA leader will expound the benefits of automated interoperability testing. But there is now increasing evidence that C-suite executives are appreciating the advantages, too.

Research from Tricentis found 24% of companies had automated more than 50% of their testing. It expected that figure to rise to 44% over the following 12 months.

More than six in 10 respondents reported that automated testing had delivered faster testing cycles and increased testing efficiency. Over half said their testing coverage had improved, and 41% said automation had helped them to find bugs earlier.

With QA teams taking an increasingly important role in a business’s long-term success, automation will only continue to grow. It will advance in areas ranging from regression testing and repeated execution through to load testing, performance testing and stress testing, making robust products that meet consumer demands.

The risks of ignoring automated testing are simply too great.